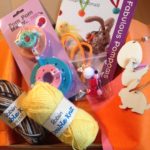 Believe it or not…we had a staff member who wasn’t quite sure about making pom poms!!!

and whilst we do have a 4 piece kit in store First of all using a bit of cardboard (an old cereal box will do) draw around the bottom of a glass twice and draw a smaller circle inside both circles. You will need to cut both circles out and the inner circle too. You should now have two rings or doughnuts. Place the circles ‘doughnuts’ together and using some yarn … (we reckon ours took about 6m but then these were quite small so make sure you have plenty)… start winding the yarn around both doughnuts. Continue this until you can no longer see any more of the cardboard and even better continue until the hole is completely closed up Cut a strand of the yarn off as you will need this to secure the pom pom. Very carefully separate the doughnuts and with one hand hold together the two doughnuts firmly and with the other hand begin cutting through the middle of the yarn. Ruffle up the pom pom and cut the two ends of yarn so they mix in with the other strands of pom pom yarn and there you have it, you have made your very own pom pom!

Now if that all seems like a big lot of bother, why not pop into the-stitchery and invest in our 4 piece pom pom kit and some Robin DK yarn and pom pom pom quickly, easily and efficiently to your heart’s content…

now what can we make or decorate with pom poms….

time to pop into the-stitchery…

We use cookies on our website to give you the most relevant experience by remembering your preferences and repeat visits. By clicking “Accept All”, you consent to the use of ALL the cookies. However, you may visit "Cookie Settings" to provide a controlled consent.
Cookie SettingsAccept All
Manage consent