Hessian (or burlap as it is also known in the US and Canada) is a woven fabric usually made from skin of the jute plant or sisal fibres. It is a loosely woven, coarse fabric with a distinct sacking smell and frays easily.

Laundering is not recommended

Everyone seems to want this stuff – it’s one of our most popular fabrics and we are constantly re-stocking, but it seems it’s used for everything except dressmaking…unless of course you want a “hair shirt” or to wear  “sackcloth” on Ash Wednesday.

Shipping: Hessian is often used to make sacks and bags to ship goods such as coffee beans and tea; these contrivances are known as gunny sacks. It is breathable and thus resists condensation and associated spoilage of contents. It is also durable enough to withstand rough handling in transit. Hessian is also commonly used to make effective sandbags; hessian sacks filled with sand are often used for flood mitigation in temporary embankments against floodwaters or field fortifications.

Hessian is also often used for the transportation of unprocessed dry tobacco. This material is used for much the same reasons as it would be used for coffee. Hessian sacks in the tobacco industry hold up to 200 kg (440lb) of tobacco, and due to hessian’s toughness, a hessian sack can have a useful life of up to three years.

Landscaping: we’ve seen this useful fabric used to wrap the exposed roots of trees and shrubs when transplanting.

Art: Hessian is used by artists as an alternative to canvas as a stretched painting or working surface.

Beekeeping: this relatively inexpensive fabric is often used as smoker fuel in beehive-tending because of its generous smoke generation and ease of ignition

Weddings: Hessian makes funky table runners and mason jar wraps for that authentic rustic feel. This last use is currently bang on trend for bridal themes especially combined with cotton lace – we love this look…

price is per metre

There are no reviews yet.

Only logged in customers who have purchased this product may leave a review.

This is single-sided woven ribbon It is 38mm wide This Glittering Foliage ribbon has a sealed, cut edge and features... 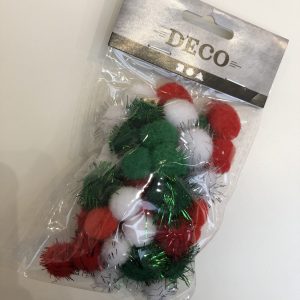 This pack of Christmas pom poms are from the Deco Brand There's 48 in this pack -assorted colours and sizes... 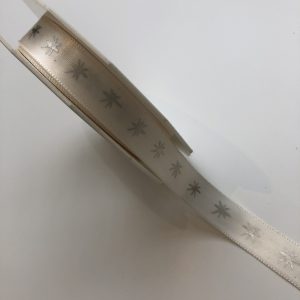 This is single-sided, printed satin ribbon It is 15mm wide This subtle ivory celebration ribbon has a repeating 'hand-drawn' star...

£1.25
Add to basket
We use cookies on our website to give you the most relevant experience by remembering your preferences and repeat visits. By clicking “Accept All”, you consent to the use of ALL the cookies. However, you may visit "Cookie Settings" to provide a controlled consent.
Cookie SettingsAccept All
Manage consent